When Stewart Brand spoke at the University of Nebraska-Lincoln in mid-January, he broadcast a vision of a Genetically Modified (GM) future toward which he felt we should all be charging with bright-eyed enthusiasm. “Get out there where it’s getting weird,” he exhorted, “and get weird with it.”

As I sat and listened to Brand talk of the future, I was carried in reverie not forward but backward to 1964. That’s the year my mom took my sister, my brothers and me to the New York City World’s Fair where we made a pilgrimage through the most celebrated exhibit of all, Futurama. Sponsored by another GM (General Motors), the exhibit offered a glimpse into what life would be like in the future — as GM engineers wanted to conceive of it. Of course, the future materialized its own way, not in accordance with immaculately engineered visions.

Likewise, Stewart Brand’s exhilarating vision of a corporately-owned, genetically-modified World of Tomorrow — a world subsisting on a diet of what he calls ‘Green Ag BioTech’ — seems to me unlikely and ill advised. 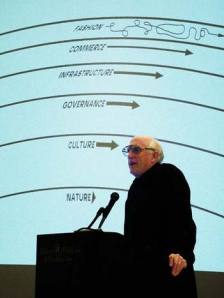 Founder of the famously countercultural Whole Earth Catalog back in 1968, Brand now styles himself as an “ecopragmatist.” He said that three global dynamics – climate change, urbanization and biotechnology – are causing people like himself to reverse long-held opinions and to embrace nuclear power and genetically modified food.

Brand is vivid and likeable on the stage, and his talk was expansive and entertaining. Because he is such a prominent convert to biotech, his philosophical reincarnation as an ecopragmatist advocate for nuclear power and GMO food might well have a measure of influence. But not with me.

His talk left me unconvinced and unraptured by the whole vast global laboratory experiment on nature and our food that is currently being executed with slam-bam systemic speed. I just don’t hear the call of the land as a plea for more industrially created, corporately owned genes and the petrochemicals necessary to sustain them. What I hear instead is a full-throated call for natural respect. Same as it ever was. 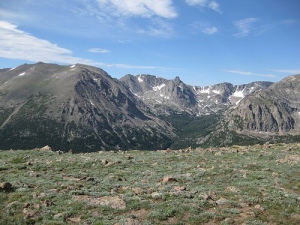 Brand told the story of how on his way to Nebraska to speak he had flown over the Sierras. While in the air he saw that there was no snow pack at all on the mountains this year. This kind of ominous drought, he said, has not occurred since the 1880s. Climate change is catastrophically real, he then affirmed, saying it was a central motivating force for the work he does in the world.

In the context of our unfolding climate calamity, Brand asked rhetorically, “What is moral and ethical?” He answered his own question in the same breath, saying that nuclear power, genetically modified plants and animals, and geo-engineering are all essential ways to the future, and that we — corporations, universities, governments and amateurs — ought to go full steam ahead into a more fully nuclear-powered, genetically modified world.

Brand said that at this point in history environmentalists have only hand wringing to contribute to the future. He derided “enviros,” saying they are people caught up in a web of suspicions and superstitions. They are just “sad reactionaries,” he lamented. 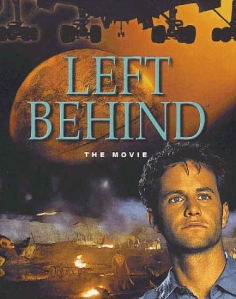 Aflame with hot scriptures of material technology, Brand allowed his rap to devolve. He uttered a disheartening damnation of unbelievers. In the years to come, Brand warned from his pulpit on stage, the leading edge of biotech will not be here in America but rather far afield in China, Africa and the Third World. Those places lack opposition, and have minimal regulation. In places like America where there is opposition to these thrusts, he warned, people such as organic and sustainable farmers and their supporters will be “left behind.” Organic farming will be more expensive and will yield food with less nutritional value than patented transgenic crops. Organics will become irrelevant.

Brand tossed off several ad hominem slams to imply that opposition to a GM future arises not from authentic, evidence- and ethics-based concerns, but rather from irrational fear.

In that sense his presentation was a special pleading: a form of argumentation where a person excludes facts or details that would upend the case they are attempting to make. Enraptured with his subject, Brand stuck to sweeping generalizations, and neither acknowledged nor refuted the substantial body of legitimate concerns about GM corporate industrial farms and food. This struck me as a disservice to the debate.

These matters — scientific concerns about GMOs, the free will of human beings, and a saddening, stupefying wave of suicides — must be addressed in any discussion of corporate industrial agriculture and GM seeds and food. To ignore them, or to gloss them over, creates a dangerous distortion of reality.

At one point Brand showed a PowerPoint slide with a double-headed arrow to illustrate the spectrum of opinion on climate change: from total denial to full acceptance. But he made no allowance for a justifiable spectrum of opinion on GM food. In his view, at least as I heard him express it, there are only two stances: sanguine acceptance of corporate genetic manipulation of the food chain, or pitiful irrational fear of the future.

There are millions of people who, for sound ethical, scientific, and spiritual reasons, oppose GMO-chemical farms and food. And there’s a mounting library of research that should give any thoughtful person pause.

The health consequences of eating genetically modified organisms are still largely unknown. GMOs just have not been proven to be safe over the long term. Increasingly, studies are suggesting that grave health problems — for plants, animals and humans — may well be caused by GMOs. We’re all still guinea pigs. Make no mistake: the jury is still out.

Consider. Nearly 50 countries — including Brazil, China, South Korea and the European Union—already ban many genetically engineered foods altogether. They also generally require labeling of GMO products so their people will know what they are eating.

As expressed by UC Berkeley professor of microbial ecology, Ignacio Chapela, “…the fundamental truth stands that over the decades no real benefit has offset the proven harm caused by GMOs.”

Most Americans, however, are every day ingesting plate loads of lab-created DNA while having absolutely no idea about what they are doing, and no choice in the matter. There are no labels. Our free will has been rendered inconsequential, even though surveys show overwhelmingly (93%) that Americans do want labels. More than half a million people have already signed a petition to the FDA asking for the basic information and protection of labels.

For these and other reasons I have written about, I am altogether at peace with the idea of being left behind by the corporate GM onslaught. I remain unraptured. I’ll take my stand for the future on clean, organic land and food. Same as it ever was.

The debate about GM food will amp up considerably this year, starting on January 31. That’s the day that the courts will hold a preliminary hearing on the lawsuit the Organic Seed Growers and Trade Association (OSGATA), and others have brought against Monsanto. The hearing will determine whether this landmark case goes forward.

Along with 83 family farmers and organic ag groups — a group totaling over 300,000 members — OSGTA is challenging Monsanto’s patents on genetically modified seed.  The plaintiffs are carrying a banner in a crucial courtroom stance for everyone concerned about GM transgenic food.

The 300,000 member plaintiff group will set their case out in opening remarks at the hearing: “Society stands on the precipice of forever being bound to transgenic agriculture and transgenic food. Coexistence between transgenic seed and organic seed is impossible because transgenic seed contaminates and eventually overcomes organic seed.”

The Plaintiffs say they are seeking relief from the court because organic, biodynamic, and other farmers need legal protection against contamination by Monsanto’s transgenic crops. They will present evidence to show transgenic food does not serve the public interest, nutritionally, environmentally, agronomically, or genetically.

This case is of resounding significance not just for farmers but also for consumers. There are far-reaching potential health consequences of transgenic food, particularly for future generations of plants, animals, and people. All this and more will arise for courtroom debate. 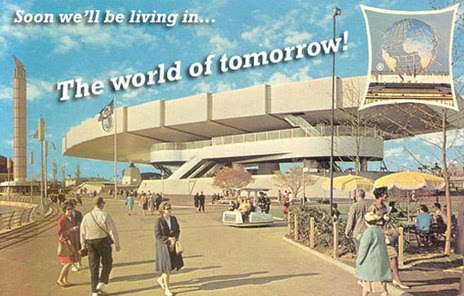 14 thoughts on “Left Behind: Unraptured by the Transgenic Tsunami”