With all that’s happening in the world in general, and to our farms and food in particular, I was happy to read this positive, edifying review of one of my books on the subject of Community Supported Agriculture (CSA). The book is titled Awakening Community Intelligence: CSA Farms as 21st Century Cornerstones.

I wrote this slender volume – a vision and a call to action – in 2015, immediately after my twin brother Michael died. I felt his spirit urging me to direct in a constructive way the maelstrom of feelings that swarmed me within and without. Awakening Community Intelligence is the result.

The substantive review appears in the current edition of the Journal of Agriculture, Food Systems, and Community Development.

Here’s the review’s first paragraph: “In the slender volume Awakening Community Intelligence, journalist and long-time community supported agriculture (CSA) advocate Steven McFadden argues for the exponential expansion of CSAs. In the face of profound, disruptive challenges in the 21st century—climate change, resource depletion, geopolitical instability—McFadden believes CSAs have the potential to become “community cornerstones” that provide “key points of stability and orientation.” In ten very short chapters, McFadden unfolds his vision of this potential and issues a call to action…”

The elemental wherewithal of our farms and our food is in motion. Whirlwinds of change bear upon our land, air, water and climate. Fundamental forces have shouldered their way front and center. The land calls urgently.

As reported worldwide this month, scientific evidence shows that the level of the most important heat-trapping gas in the atmosphere, carbon dioxide (CO2), has mounted far beyond the danger zone. Heat is rising. Consequences are evident.

CO2 has now reached an average daily level above 400 parts per million, a level the Earth has not experienced for three million years. That was during an epoch called the Pliocene.

The overwhelming majority of scientists understand that this current rise in CO2 portends epic changes.

“Our food systems, our cities, our people and our very way of life developed within a stable range of climatic conditions on Earth,” former Vice President Al Gore observed in the wake of the CO2 report. “Without immediate and decisive action, these favorable conditions on Earth could become a memory.”

Following the front-page news about the rapid deterioration of the earth’s climate, came two other hard news stories that underscore the matter of food vulnerability: news of the disease-driven collapse of the staple food crop for more than 500 million human beings in Africa, and news of grave troubles for citrus fruits in America and around the world. 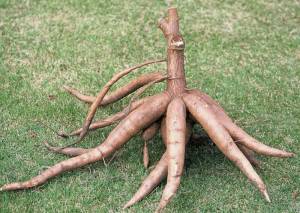 In Africa the cassava plant – which produces a large, edible root – is succumbing to brown streak disease. Africa already suffers debilitating food shortages. Because casava is the staple food for the continent, this plant disease is calamitous.

Meanwhile, the citrus industry is grappling with an infernal bacterial disease that has now killed millions of plants in the southeastern United States and is threatening to spread across the entire country. The disease has also been found in Asia, Africa, and South America.

Citrus Greening, also called Huanglongbing or Yellow Dragon Disease, is fatal. The bacteria devastate trees, rendering bitter, misshapen oranges, then death for the entire organism. There is no known cure.

“This year (2012-13) was a real kick in the gut,” Florida’s agriculture commissioner told The New York Times. “It is now everywhere, and it’s just as bad as the doomsayers said it would be.”

When I absorb this short stack of climate and food news — just a fraction of the farm and food factors in flux — I realize that we must dig in now more resolutely to build a clean, respectful, sacred and sustainable foundation for civilization. That is the direction forward.

Many thousands of local, organic agrarian farm-and-food initiatives have arisen across the Americas in the last 25 years. They offer a wide array of working models. Those models can and should be replicated and emulated far and wide. They represent intelligent and promising responses to the imperative call of the land.

Organic farms and the cooperative food systems they are entwined with (the whole, broad range of 21st century agrarian initiatives) have manifold positive responses to the central issues, and a track record of evidence. They sequester carbon in the land and thereby mitigate CO2, helping stabilize climate. They offer clean, fresh food directly to people who live near the source. They provide dignified work in nature. They knit together healthy webs of relationship, both personal and digital, around concerns of a foundational nature to every human being. They teach essential ethical values. They establish oases of radiant environmental health. And they bring large numbers of people into a more direct and equitable relationship with the human beings who grow their food, and the land it is grown upon.

21st century agrarian initiatives also provide wholesome anchoring points (network nodes) for the brittle high-tech, digital-wave culture emerging so dynamically in our world. We are just at the beginning of that, really.

This 21st century agrarian initiatives – the many thousands of urban farms, CSAs, co-ops, community kitchens, church farms, and city gardens of all sizes shapes and descriptions – constitute core elements of a more wise and respectful human response to the imperative call of the land.

The cooperative development of clean local food systems is in no way a boutique idea or a passing fad. It is a key element of modern food security, and it is emerging not just as prudent but also as essential. It is also about the renewal of our overall human relationship with the earth that sustains us.