“Our ancestors made this great agreement on our behalf 400 years ago. Now is the time for us to think about the people living in the next 400 years.”   – Hickory Edwards (Onondaga Nation)

Long ago when the colonial peoples were seizing possession of the land they would come to call North America, they entered into sworn agreements with the human beings who already occupied the land. The Two Row Treaty, the first of those solemn agreements, is as of 2013 now 400 years old.

To serve as a permanent record of the treaty, the Haudenosaunee (Iroquois) people wove a belt of beads from wampum sea shells, their traditional way of recording sacred agreements, a means more elegant and enduring than the fragile sheets of paper marked with ink that the colonial settlers used.

Commemoration of that treaty is reaching a crescendo late this summer with an elaborate series of lectures, concerts, celebrations, historic enactments, and collaborations planned by The Two Row Wampum Renewal Campaign.

The intention is to polish this centuries-old covenant chain of friendship, to protect our shared environmental inheritance, and to build support for resolution of various land rights actions.

The call to honor the treaty comes in the context of perfect faithlessness. The USA has broken or violated every single one of the nearly 500 legally binding treaties it has entered into with various Native nations.

In recent years, Native peoples have increasingly emphasized that ecological stewardship is a fundamental necessity for this continuing friendship, for a more just peace between peoples, and for a sustainable, shared future in parallel on the land we inhabit together.

A Basic Call to Consciousness: Resounding in Year 34 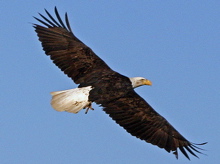 Last week Doug George-Kanentiio sent me notice about the recent establishment of the Hiawatha Institute for Indigenous Knowledge in New York State, in partnership with Syracuse University. The Institute has just been gifted a historically and spiritually vivid parcel of land for its headquarters. Thus has come about an opportunity for profoundly important old roots to settle back into the land, and to send out new branches.

Doug and his wife Joanne Shenandoah — both serving on the board for The Hiawatha Institute —  have with others long held the vision for such an institution, something that may develop to become an Indigenous University anchored on North America, open to students from all cultures and all parts of the world.

“Our way is to make it possible that people come to a meeting of the good mind,” Doug told me two years ago. “To get there, you need to sit in respect with one another. You have to invite people from all walks of life and viewpoints to share information, and you have to listen to one another.”

In learning about the establishment of the Hiawatha Institute and its mission, I was reminded of a seminal tract of reading that arose from the same native North American wisdom streams some 34 years ago this month: Basic Call to Consciousness. That’s the title of a succinct book that conveys core expressions of the oldest, deepest traditions of North America, and places them with resonant validity in the context of our raucous era. 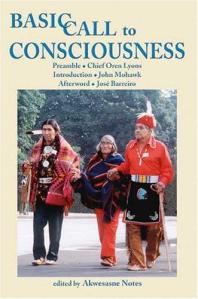 Basic Call to Consciousness — The Haudenosaunee Address to the Western World — was initially articulated to an array of NGOs at the United Nations in Geneva, Switzerland, October 1977, and then later published in book form by Akwesasne Notes. The work is a classic of informed and elevated political and spiritual philosophy that is acutely relevant now, and that will likely remain relevant for centuries on into the future. The Hiawatha Institute will help make that possible, striving to listen consciously to the call of the land and then to respond from the good mind.

To honor the contribution of Basic Call to world thought, and to resound its notes in this 34th year, here are some selected passages:

“For centuries we have known that each individual’s action creates conditions and situations that affect the world. For centuries we have been careful to avoid any action unless it carried a long-range prospect of promoting harmony and peace in the world. In that context, with our brothers and sisters of the Western Hemisphere, we have journeyed here (UN) to discuss these important matters with the other members of the Family of Man.”

“The way of life known as Western Civilization is on a death path…Our essential message to the world is a basic call to consciousness. The destruction of native cultures and people is the same process which has destroyed and is destroying life on this planet…

“…The principles of righteousness demand that all thoughts of prejudice, privilege or superiority be swept away and that recognition be given to the reality that Creation is intended for the benefit of all equally — even the birds and the animals, the trees and insects, as well as the human beings…”

“We are living in a period of time in which we expect to see great changes in the economy of the colonizers…We will soon see the end of an economy based on the supply of cheap oil, natural gas, and other resources, and that will greatly change the face of the world…”

“…The people who are living on this planet need to break with the narrow concept of human liberation, and begin to see liberation as something which needs to be extended to the whole of the Natural World. What is needed is the liberation of all the things that support Life — the air, the waters, the trees — all the things which support the sacred web of Life…”

You can read the text of Basic Call to Consciousness online here, or purchase a bound copy of the book through the Open Library hub.

This is the Holy Land

“I’m always a little surprised when I hear people say that they are getting on a plane and heading off to the Holy Land,” Winona LaDuke said. “Because the Holy Land is here. This is it right here in America. We are standing right now on Holy Land.  My people have known that forever, and it’s time everyone came to understand it.”

Winona was the keynote speaker at the 5th annual Chief Standing Bear Breakfast, served up in the Heartland, May 21, Lincoln, Nebraska. As she uttered the last syllable of her pronouncement about holy land, the Earth responded, as it often will in a moment of truth. The ground began to tremble. The subtle shudder continued for 20 seconds or more. It was definite. I felt it. Others felt it, too.

Currently serving as director of Native Harvest and the White Earth Land Recovery Project, Winona spoke simply but eloquently for 25 minutes before an audience of about 400 people. In the course of her remarks she mentioned her late father, Sun Bear, an old friend and colleague of mine. Sun Bear was an actor, an activist in his own right, and convener of the influential Medicine Wheel Gatherings in the 1980s and 1990s. “Very often,” Winona told the audience, I heard my father say, ‘I don’t want to hear your philosophy if it won’t grow corn.’ It took me a long time to understand what he meant, but I get it now. He was on to something important.

“I know also,” she added, “that when you grow your own food it makes you a better human being. It connects you to the land you live upon, and it relieves a certain poverty of spirit.

At the breakfast event the Ponca Tribe of Nebraska announced plans to advocate for a national holiday to honor their late chief, Standing Bear, and to strive to have him recognized as someone as important to civil rights as Martin Luther King, Jr.

In 1879, Standing Bear challenged decades of U.S. policy when, in the course of federal prosecution in Omaha, Nebraska, he demanded to be recognized as a person. That was the first time an Indian was permitted to appear in court in this country and have his rights tried.  The government argued that Indians were not entitled to the protection of a writ of habeas corpus because they were not citizens or even “persons” under American law.

Late in the afternoon as the trial drew to a close, the Judge announced that Standing Bear would be allowed to make a speech in his own behalf. No one in the audience had ever heard an oration by an Indian. Standing Bear rose. Half facing the audience, he held out his right hand, and stood motionless. After a long pause, looking up at the judge, he said: “That hand is not the color of yours, but if I prick it, the blood will flow, and I shall feel pain. The blood is of the same color as yours. God made me, and I am a man…”

Standing Bear spoke for several minutes more. When he was complete the courtroom crowd, moved by his logic and his eloquence, erupted with a resounding shout of support. Thereafter, in time, the federal judge handed down a ruling that Indians are in fact human beings — persons within the meaning of the law. This was a historic ruling on the status of Native peoples on the land they have inhabited for many thousands of years — land that, according to their ancestral traditions, they have a definite and special spiritual responsibility to protect.

Scholars have likened the impact of Standing Bear’s case to the impact that the earlier 1857 Dred Scott case had for the rights of African Americans.  The Dred Scott case essentially declared that a human being had no constitutional rights because he was black. It was the most egregious legal decision of its time. violating both logic and human decency. So twisted was the legal logic that it compelled people to consider what slavery really meant. Likewise, the Standing Bear case compelled people to recognize that Natives are also human beings, with a fundamental entitlement to justice. NET has produced a TV documentary exploring the issues – Standing Bear’s Footsteps — that will be broadcast later this year.

At the breakfast in Lincoln, in what resounded as the morning’s unexpected coda to the case of Standing Bear and all human beings, Winona ended her talk with an observation.  There is currently, she said, a great national debate raging on the subject of immigration. The debate is being stirred by SB 1070, a law recently enacted in Arizona (a law that has become a model for legislation that other states, including Nebraska will be voting on the months ahead). “In the circumstances of this law and its impact there is a cruel irony,” she said. “Most of the people who are intended to be excluded from this land by laws like this come from a genetic lineage that has always been here — family lines that trace back in North America for 10,000 years or longer.”

These relatives — mostly people from Mexico and Central America — are in many cases farm workers: people who labor in the fields to grow our grains and vegetables, or who toil like machines in the vast Confined Animal Feeding Operations (CAFOs) and slaughterhouses that yield our chicken, beef, and pork. Whether we acknowledge and respect them or not, these are our Ambassadors to the Holy Land. They touch the Earth on our behalf. They raise up the food that we eat. They, like Standing Bear, are human beings, too.